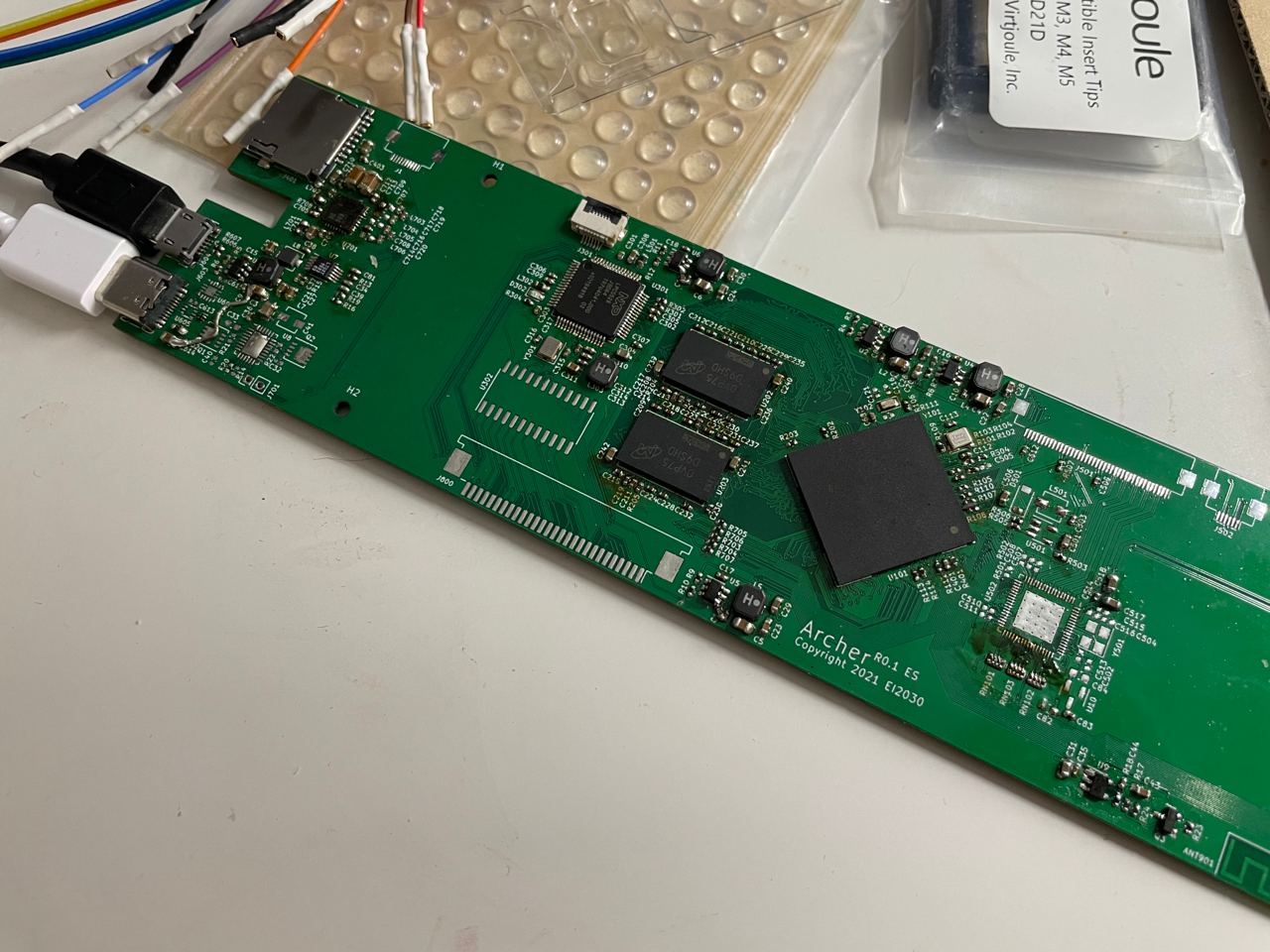 This blog post is about the initial board bring up process of the Archer. Archer is the codename for our EPD laptop prototype at EI2030. This is not a comprehensive bringup guide, but rather document the issues I found and the corresponding solutions. The processor being used is the i.MX 7Dual.

When there is no vaild boot devices, i.MX would enter mfgtools or USB recovery mode. In this mode the DDR stress test tool provided by NXP could be used to test the DDR read/ write leveling values. Though generally if the board is well designed, it should pass the stress test at room temperature without special calibration.

On i.MX7D, the DDR frequency could be set from anywhere up to 528MHz (DDR3-1056). By default, Boot ROM sets the DDR PLL to 1056MHz. Neither u-boot nor kernel would touch the DDR PLL settings. In kernel, the kernel would switch the DDR frequency between 24MHz, 99MHz, and 528MHz by choosing the clock source from CLKOSC, PFD396/4, and DDR PLL respectively. As an conclusion, to adjust the DDR clock frequency (for example, downclock from 1056 to 792), one could simply modify the DDR PLL settings in the DCD before u-boot starts.

uuu could be used to load and start u-boot directly over USB. See the following example script:

If loading Linux/ buildroot is not necessary, the corresponding lines could be removed.

To flash U-boot to SD card for SD boot:

On our board, the U-Boot initially failed to boot from the SD card. There could be multiple reasons why this is happening, but a common one being the board fails to read the SD card in SDR104 mode, due to non-working 1.8V/3.3V voltage switch, unmatched trace length, bad SI, etc. Limit the mode to HS usually solves the issue. One our board it was a bit more complicated (weird):

In u-boot, the card is detected, and works under 50MHz. Commands such as fatls and ext4ls works fine. But mmc info shows only 1-bit mode. In Linux, the kernel could detect the card but fails to read even just the partition table. It turned out the PCB fab screwed up and shorted D0 and D2:

No output after jumping to kernel

Try enable the early console and see if it prints out anything with it:

The name ec_imx6q might be a bit misleading, but this is the correct driver to use for i.MX6/7/8. Please refer to the processors' RM or dtsi file for the UART base address.

If there is still no output using earlycon... I don't know. Probably check DDR?

Kernel hangs after "psci: probing for conduit method from DT"

The kernel would jump to the psci firmware after this line. Early versions of u-boot doesn't seems to be able to setup psci correctly when booting from mfgtools. Boot from SD or upgrade to latest version (imx v2020.04 5.4.70 2.3.0 works fine).

The waveform is basically a look up table for the EPDC to determine how to drive the pixels.

The waveform file is independent to the resolution. So for example the device has a 1024x758 screen, and one could drive the screen with a waveform designed for a 800x600 screen. It should at least display some image. Maybe the greyscale wouldn't be correct with incorrect waveform file but it should display some recognizable image.

The waveform distributed by Eink is usually in .wbf format, while the i.MX SoC uses a converted binary format. There are 3 generations of EPDC:

(What a good naming scheme)

Note: NXP's documentation suggests that the EPDC in i.MX6ULL is not as powerful as the one in i.MX6SLL/ i.MX7D, but it still uses the EPDCv2 driver.

I am not entirely sure about the difference in the waveform formats across EPDC generations, but doesn't seem to be fully compatible. NXP has tool to convert from .wbf to .fw, which (I assume) could be obtained after signing an NDA with NXP. I am not sure about the EPDC used in the upcoming i.MX8ULP.

There are 2 versions of the waveform, one being 4bpp and another being 5bpp. Note 5bpp waveform doesn't mean it supports 32 level of greyscale, it only means it uses 5bpp internally to represent pixel states. Usually 5bpp waveforms only supports 4bpp greyscale.

The timings are defined in mxc_epdc_v2_fb.c. It includes the resolution information. Usually the timing could be found from the screen specification, but it might not match the waveform. There are 3 important parameters in the timing: resolution, refresh rate, and duty cycle. The other parameters could be chose freely (within certain ranges) without affecting the image quality.

NOTE: In the mxc_epdc_v2_fb.c, the pixel clock is the DDR clock, in SDR mode it needs to be doubled. For example, setting it to 66MHz actually generates a 33MHz pixel clock. The applies to data rate only, the timing is still calculated at double frequency.

For example, the example configuration for ED060XH2C1:

Our ED103TC2 uses a 130Hz waveform, so the timing should be configured to generate ~130Hz framerate. First choose an appropriate clock frequency, the clock frequency offered by EPDC driver is in fairly large steps:

The ED103TC2 specifies a maximum clock frequency of 83.33MHz, so the maximum value could be used at EPDC side is 166MHz.

Setting the timing to invalid values (such as zero sync width, over one period sync location etc.) could cause screen to not refresh at all (Mode0 init failed), or timeout during refresh.

Setting the timing to inappropriate values (too high or too low refresh rate, too short blanking, etc.) could cause screen to not display greyscales properly, having strange bars on screen, showing image with offset, etc. But generally it should display recognizable image in these cases.

The EPDCv2 driver always configure the screen to be scaned from top to bottom and uses 8bit data bus. This could be changed by modifying the driver:

i.MX EPDC FB driver exposes some additional ioctls to refresh the screen. Example could be found at https://github.com/boundarydevices/imx-linux-test/blob/5.7/test/mxc_fb_test/mxc_epdc_v2_fb_test.c

i.MX EPDC has an automatic update mode, basically it would update the screen automatically when the framebuffer is changed, thus the application does not need to be EPDC aware. This allows using Xorg or other applications on EPDC driven EPD screen. It seems like it is working fine for others (Linux on Kobo, or Parabola-RM), but I was having issues using it. There are 2 issues with it self (it has other issues even if the feature works):

The memory bandwidth is a serious issue when using the auto update mode.

The memory subsystem should be able to keep up with the pixel clock. For example, use the 128Hz 96MHz timing mode I calculated before. The actual pixel clock is 48MHz at 8 pixels per clock. It means 48 * 8 = 384 Mpixels per second. The EPDC internally uses 8bpp buffer, but it needs 2 buffers to calculate the difference, so it needs 2 bytes per pixel. This would ended up with a 768 MB/s memory bandwidth requirement just to refresh the screen. However, usually the buffer in the memory is a 16bpp color buffer, so a memory copy and dither down process (implemented using the pixel pipeline hardware accelerator, or PxP) needs to happen before the EPDC refresh the screen. Assuming updating the EPDC buffer at 10Hz, that's additional 1872x1404x3x10 = 78 MB/s memory bandwidth requirement. Combined they use ~50% of useable BW of DDR3-1066 @ 16bit memory.

These numbers looks okay so far, seems like there are still lot of headroom. However the issue is that, when using the auto update mode, these are the things that's continously burning the memory BW, and i.MX 7 doesn't have lot of memory BW to begin with.

If one is not using auto update mode and doesn't refresh screen very often (common case for e-readers), then these are not issues at all.

The waveform provided by Eink has many modes. There is a good document from Eink describing the modes:

It provides a good overview of the modes. I am just going to add some comments.

Because the EPDC uses this much memory bandwidth, it is actually necessary to manually setup the QoS to make sure that the EPDC gets the data from memory when the memory bus is busy. When the EPDC fails to read data required in time, it would generate a "TCE underrun" error. With stock driver, this usually happens when the EPDC is updating the frame while the CPU tries to do some memory intensive operation (for example, prepare the next frame) at the same time. This Actually I have encountered similar issues in the i.MX6. When I am rendering 3D images, the GPU would eats up all the memory BW, if the IPU doesn't have higher priority, it would not get enough BW to refresh the screen. The i.MX 7's EPDC code already has QoS code built in, but it is doesn't seem to be working, I need to dig into that. There is one person encountered the same issue and asked on NXP community, but didn't get the solution: https://community.nxp.com/t5/i-MX-Processors/imx7d-tce-underrun-problem/td-p/1032917

Unfortunately, there is no information in the i.MX7D reference manual about how to program the QoS controller. According to the device tree, the QoSC sits in the AIPS-2, at 0x307f0000. Guess what reference manual say about that memory location...

It is reserved! Glad NXP has some non working code in for setting up the QoS, otherwise I will have no idea how to fix it.

Based on the i.MX6's QoS code and u-boot code, there are several things that could be wrong:

However, after fixing all these, it still doesn't seem to be working.

Another point could be looked into, is the memory controller. The QoS value would eventaully reaches the DDR controller, and getting parsed by it. In the DDR controller, there is really only 3 levels or 2 levels, depending on one synthesize time parameter (which I don't know). By default, QoS value > 14 are high level, and anything > 0 are medium level, then 0 is the low level. With this setting, there are 2 possibilities:

In any case, it shouldn't matter as long as the EPDC RD channel is at 15 and everything else is at 0 (But I don't have anyway to check that).

But then it just still doesn't work. There are few possible reasons, but from this thread: https://community.nxp.com/t5/i-MX-Processors/Priority-of-the-AXI-bus-in-i-MX7D/m-p/693806, it seems like one simply cannot change the QoS level. These registers are reserved for good reason, and NXP's broken code to change the QoS level just doesn't do anything. (I am not entirely convinced, as NXP seems to claim it fixes the stress test https://lists.denx.de/pipermail/u-boot/2017-August/302437.html To workaroudn the issue, either making sure your application code is not using lot of memory BW while the screen is refreshing, or switch to another processor (like i.MX6).